Beyond the traditional ZOPA: how to create value in complex deals 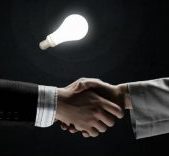 You’ve all been told that to create value in your negotiations and get the “best” deal for your organization you need to expand the pie, not just haggle over the limited and fixed number of pie pieces. But no one has really demonstrated pie expansion – value – for commercial contracts – until now.

In this article, we will describe how the traditional Zone of Potential Agreement (ZOPA) takes on a greater significance when negotiating a multifaceted agreement. We will also show you one element of a value framework which will help you to place a value on Terms and Conditions which will aid in making tradeoffs.

A New Way to Look at Your ZOPA

The term ZOPA was coined by Fisher & Ury in their groundbreaking book Getting To Yes. The ZOPA represents the set of offers that both parties would be willing to accept. These are the deals that are between the seller’s and buyer’s bottom lines in a traditional and one-dimensional negotiation. See Figure 1 below.

When the “price” is the only issue, the traditional ZOPA as outlined in Figure 1 is useful. However, despite being accurate for price-only negotiations, it is incomplete for modern commercial agreements.

In complex deals, the price conversation becomes intertwined with Terms and Conditions (T&Cs). In other words, a contract negotiation is a multi-issue, multi-faceted negotiation where price is one factor of many. And, value means things like supplier performance, compliance and cost-effective products and services, not just the cheapest price.

T&Cs are the most obvious set of factors impacting price. We use T&Cs to mean both operational and legal obligations and both types can directly impact the final price. T&Cs arise from many types of concerns: technical specifications, operational requirements, corporate preferences, corporate policies, legal considerations, governmental regulations, and other forms of compliance issues.

Many organizations work under some form of customer/supplier master agreement. The master agreement has standard terms and conditions covering a range of topics from limitations of liability, to regulatory compliance expectations, to the customer’s audit rights. While those master agreements are drafted by legal departments, the terms are often negotiated by contracting specialists, purchasing and sales in the context of the price to be paid for a product or service. The negotiator, therefore, not only seeks the best price for the product or service, she has to do so within the confines of a set of pre-determined T&Cs.

For example, a client purchased a $100,000 replacement part for a large machine. The purchase included a delayed installation time frame (meaning the part would arrive before the machine went off line for repairs), the supplier’s installation services, a warranty period, and an on-going maintenance and repair agreement. Those operational conditions were then incorporated into a “standard” master agreement, which included traditional boilerplate terms. The final agreement included terms such as the testing and acceptance procedure for the part, the warranty period for the part, the terms of the maintenance and repair services, as well as the usual legal language.

That was very clearly a multi-issue negotiation, and as such, that negotiation conversation needed a more complete way to show the ZOPA. Figure 1 does not even begin to demonstrate the range of value to the buying company when including a range of operational and legal terms.

Figure 2 below demonstrates a ZOPA for multi issue negotiation. The ZOPA in Figure 2 is no longer a straight line but an oval. The ZOPA has expanded beyond the one-dimensional line (represented above in Figure 1) to represent many points along a continuum within a set of ranges.

Notice how the oval shape represents the range of potential deals the buyer and the seller could agree on. (This figure shows only the T&Cs and the range of values they could have and not the combination of T&Cs and price.) While the line represents the one-dimensional ZOPA, the oval on either side contains the range of best and worst offers and counteroffers for the multi-issue negotiation.

Value is represented in Figure 2 by the widening of the negotiation map from a straight line (noted above in Figure 1) to a fuller ZOPA (noted above in Figure 2). OrganiZations realiZe value when an organization perceives tangible or intangible value in a term, condition or price point, and when each party allocates value to the other party based on their value preferences.

This means for the negotiator that not all negotiation points within the fuller ZOPA are created equally. Some terms and conditions have greater value to the respective companies. Therefore, there are many points to trade off to create value for your organization. By agreeing to both a fair price and to favorable terms in the upper area (between the traditional line and the upper edge), you design value creating, win-win deals.

So, the questions remains, how do negotiators target the best possible offers and counteroffers, in other words, expand the pie? Build a model. A negotiation model consists of four elements:
1. Identifying the terms to be negotiated
2. Defining the range of values these terms can take
3. Defining the importance of each term to both parties
4. Defining the negotiation alternatives for the terms of both parties

Of the four elements listed above, the element most responsible for helping you get more value is defining the importance or weight for each term to both parties (number 3). We will focus our attention here.

As soon as you acknowledge the fact that buyers and sellers value the same items slightly differently, you unlock hidden value. For example, a buying company and a small manufacturer will value a forecast; they just weight its value to their respective organizations differently. By recognizing the seller’s need for the forecast, the buyer can offer that forecast to enhance the seller’s ability to perform, which in turn helps reduce costs from shortages, missed delivery dates to customers etc. Even though the seller ranks and weights that forecast more heavily than the buyer will, it has tangible value to both the seller and the buyer.

Typically, negotiators are aware of the terms and conditions that must be sorted out. But, many people simply identify the term; they don’t rank each term, or place a weight (value) to the top five or ten items. For instance, in working with one client the buyers said they understood lead time in a manufacturing process. But, in a role play scenario lead time was just an abstract concept that was used as a tradeoff to get a “better” price. In fact, the buyers (in the role play) sacrificed lead times to score a better price point. Management was deeply disappointed by the role play outcomes. In reality, the cost to miss a ship date to a customer was more costly than the gains made by the cheaper price point with longer lead times.

The key is to rank and weight (value) the various operational and legal terms. That means the parties go through the “standard” agreement to identify the top five operational terms and the top five legal terms; then once those ten terms have been identified, place a value on that term. But under no circumstances should operational terms (lead times) be pitted against legal terms (indemnification). In effect, they are two separate and equally important aspects to the agreement.

The list of terms below ties directly to the multi-issue ZOPA diagram above (Figure 2). The idea being that in order to meet your target price and close a value-creating deal, you need to leverage the different weights placed on each ranked term. To do this, you need to yield your “position” on the things your organization cares less about to gain “position” on the things your organization cares more about (make some tradeoffs).

However, as the role play example above demonstrates, negotiators have to have an accurate understanding of what to yield and what to gain. In the role play the buyers had it backwards – yielding on lead times and gaining on price.

Below is a short list of legal and operational terms that are usually negotiated in commercial deals. (There are a myriad of other T&Cs, this is just a set of common terms.) You should be able to understand each term, rank them, and weight them in terms of importance. And, you should be able to appropriately tailor (from a template or other existing documentation) these T&Cs to maximize value to your organization and the supplier’s organization.

Manually listing, ranking and weighing terms, conditions and price points is just the beginning. Since weighing items is so important, you need to make sure you calculate the weights correctly. Properly done, ranking each issue means actually weighing each issue’s importance relative to a range. This is important: you do not weight them in the abstract but within a range of values. For instance, you might set a target price of $100,000. Negotiating the price range between $102,000 and $100,000 is very different than negotiating within the range between $120,000 and $100,000. The same concept applies to legal terms such as limits on liability and lead times. The range should be relative to their value.

So there is a commercially viable way to expand the pie, or in other words create value drive agreements. Recognize that in a multi-issue negotiation the traditional ZOPA is limiting. Only by widening the negotiation map from a straight line (noted above in Figure 1) to a fuller ZOPA (noted above in Figure 2) can you maximize value in relation to price. To do that, rank the variables and weight them relative to a range. In that way, you will have a value-driven set of tradeoffs that optimize price and operational effectiveness during your negotiations.